"Pirttijärvi has long been on the most distinctive and celebrated voices in joik. On Ođđa Áigodat (New Times), she shows off all of her familiar qualities, while Länsman emerges as one of Sámi music's brightes new talents."
- Merlyn Driver, Songlines (UK), August 2018

Solju - Ulla Pirttijärvi and her daughter Hildá Länsman, combine their heritage of northern Sámi language and traditional chant, known as yoik, with a desire for new and innovative music, providing a dialogue of traditional and modern Sámi culture. They're proud of their indigenous roots and want to show it to the world!

Sámi culture and identity lie at the heart of the music, reflecting mythology and aspects of the traditional lifestyles of their homeland, taking the listener to the far north of Europe: Sápmi. Their soundscape ranges from the expansive wilderness of the tundra to the most intimate lávvu fireplace.

How do this dainty duo describe themselves in five words? Vivacious, colourful, earthy, ethereal, genuine.

Ođđa Áigodat (New Times) is the winner of the The Indigenous Music Awards (IMA) – the Best International Indigenous Release 2019.

The award was given by Manito Ahbee Festival May 17th, 2019.
Ulla Pirttijärvi and Hildá Länsman were the first Sámi artists nominated for the awards.

The Folk Music Creator of the Year is a Finnish composer or lyricist who has raised the bar for folk music through multi-faceted, ambitious work. 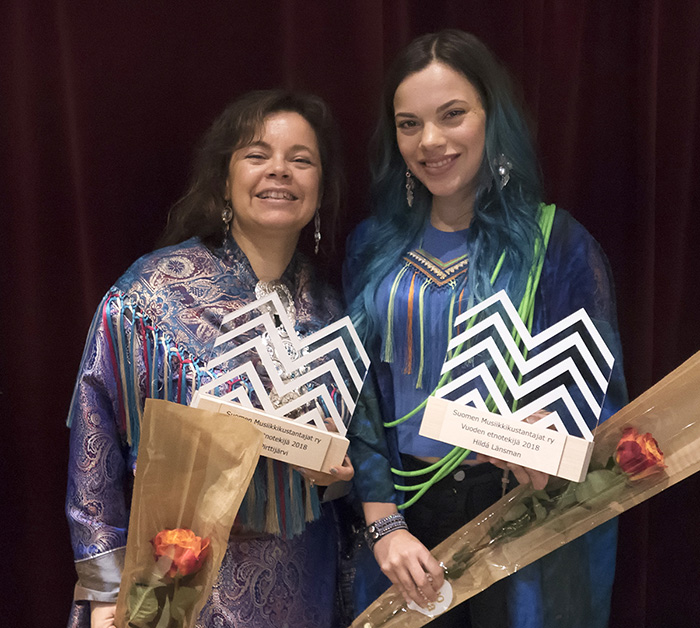 The award was chosen and given by journalist Maria Veitola.